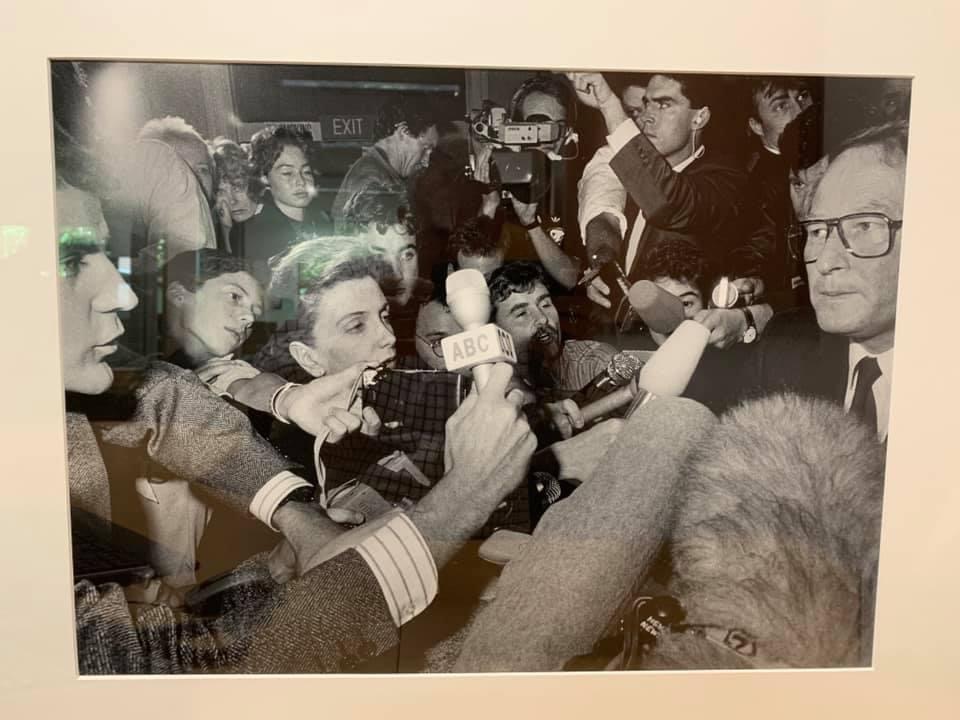 I filched this wonderful photo posted recently by another friend on Facebook.

I can’t stop looking at it. I reckon it’s a brilliant image. It says so much. It’s so evocative …

It’s the local media scrum in what used to be the tally room – Hobart’s City Hall – when then Tasmanian Premier, Robin Gray, lost the 1989 election.
Here, cheek-by-jowl, are so many of my friends and colleagues who continue to make a huge impact in journalism and the media locally, around Australia and overseas … or in other roles that their media careers set them up for.

I’m there. Can you spot me? I was just 21 years old and barely three years into my career as a journalist. I look a bit bored in this image! I remember, too, that I’d lost a good (pearl) earring in the scrum and was worried I’d be trampled if I’d stooped to try to locate it.

I remember thinking, too, that I probably didn’t deserve to be there – that there was no way that I could measure up to so many talented, seasoned and hungry reporters, who all knew what they were doing.

What I’ve learned 32 years on, is that these types of feelings and doubts never really disappear entirely. And that’s probably a good thing. After all, no one really likes someone too cocksure of themselves. But you also learn that everyone is probably the same. We all have insecurities and crises of confidence sometimes. It’s the human condition.

Of course I sometimes doubt what I’ve done. What I’ve written.

Of course I worry that a reader won’t like it or will think it’s a whole lot of rubbish or I’ll get a bad review.

Of course I’m … well … a bit scared. A bit frightened.

But I know I’d have been more scared and frightened of the years slipping past if I’d not at least had a crack.

And, yes, there are some elements of the scared and frightened 21-year-old me in Addressed.

You’ll find them in my character, ‘Holly’, who features as a cub reporter at a local newspaper …